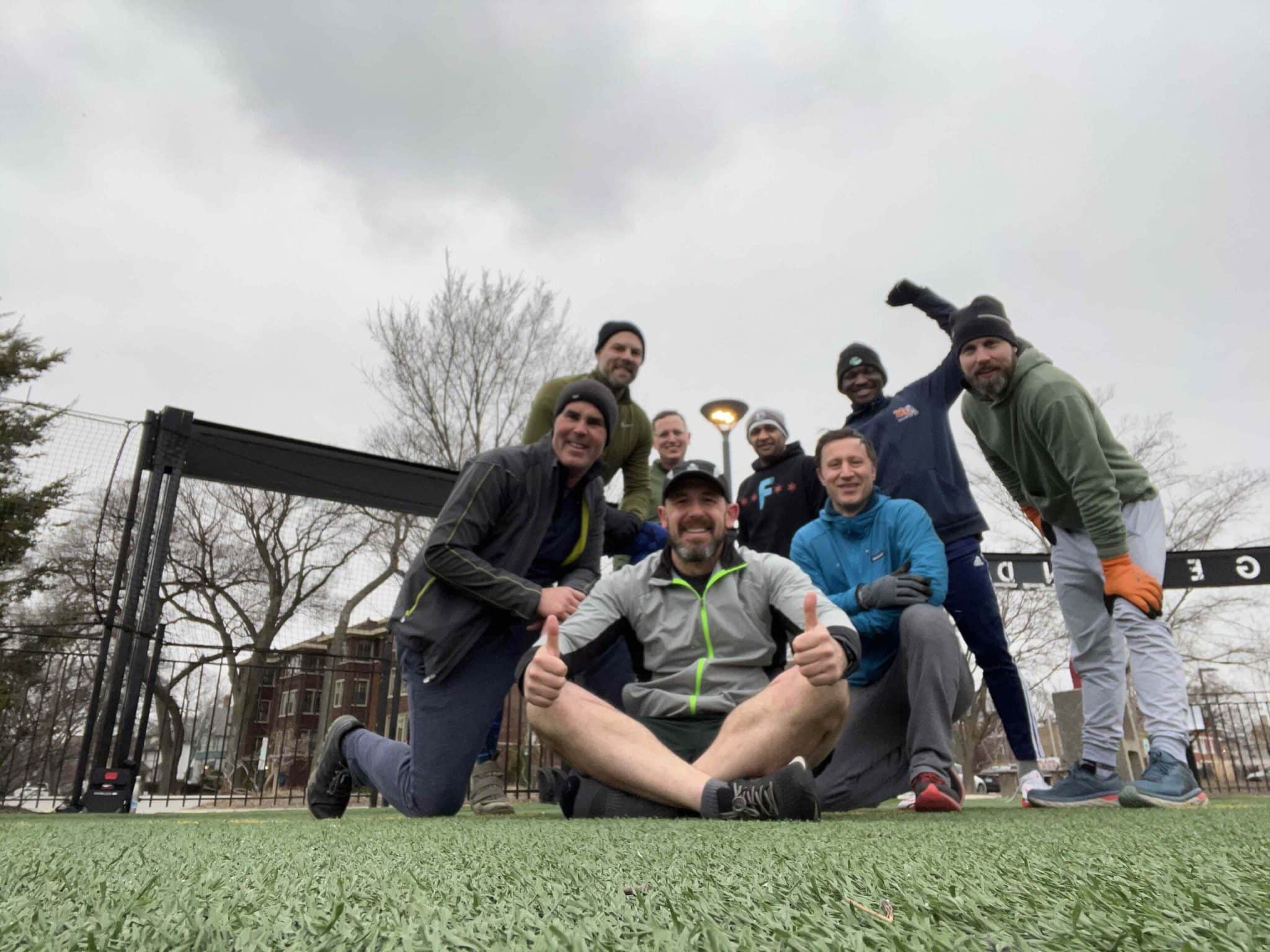 It was a cool, crisp 3℃ to kick off the morning. Your fearless Q read the temperature from his watch this AM before heading out so he caught the temp that will be happening later today. Needless to say, it was not shorts weather yet here he was… in shorts. But no worries because we’d be warming up really quick.

It’s important to note that we started the beat down with 7 PAX. You’ll read why in a bit. Warm up consisted of Global Warming with a few exercise breaks in between. Those breaks were: Motivators from 6, 10 burpees and Abe Vigodas. Sumo most likely got Abe Vigodas confused with windmills. Nonetheless, no one died so I think it’ll be okay.

We took a short mosey around the soccer field where Sumo dropped off cue cards at each corner. From there, the exercises were explained. The PAX broke up into four groups (one group at each corner) with Alliance being the brave PAX in a group of 1. The cue card explained the exercise to be done at that station. Once completed, PAX would rotate anti-clockwise to the next station and so on until they returned to their original station. To get from one station to the next, PAX side shuffled. We have to work those glutes and hips.

After Round 2, we assembled at mid-field for a few rounds of Absolution. Each PAX lead the 8-count exercise twice for a total of 14 Absolutions. Sumo then dropped the bomb that we’d be moving back to the stations for the extra credit Round 3.

At this point, Sumo and Giuliani returned to their station where someone was waiting to play soccer (read: real football). Giuliani worked his magic and head locked him within a few seconds. At that point we had an FNG join the fray for the amazing Round 3 which included bear crawls.

With now 8 PAX, we had even teams and could do the last exercise before Mary. PAX divided into two teams of four. Each team would send one PAX out at a time. That PAX would jailbreak to mid-field, backpedal back to the goal line, jailbreak to the opposite goal line and then back pedal back to the start where the next PAX on the team would go. The winning team would be the one that had all four PAX finish first. Unfortunately your Q was not on the winning team. But overall we all won because we got 1% better today. The winning team had 5 bonus burpees, the losing team had 10.

With 8 minutes left we worked through Mary. Sumo lead the group through a round of crunchy frogs and a round of zombie crunches. Giuliani gave us flutter kicks, Alliance lead us through a Buddha crunch, Footloose, Troll and CowboyMouth contributed exercises as well but your Q can’t remember. #EarlyOnsetDimensia

We finished off with American Hammers.

No words of wisdom today. But it was great to be out at a new AO with new faces and still be as welcome as ever. Carmel Saboutey was the FNG today and was named Azzuri. A huge welcome to Azzuri and excellent work by Giuliani for brining him into the fray.