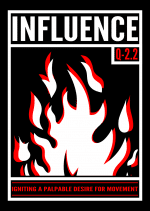 Five wrapped up a DonutShop beatdown and quickly engaged in a QSource discussion : Influence.

“Persuasion is the initiation of first Movement” – but what does that look like??

A HIM (High Impact Man) influences those around him through Word and Deed. Persuasion and even disruption to some extent will influence those around him to move from the status quo. He does this primarily through example, by the way he talks and the things he does.

Again, what is the checklist to be an influencer? Cannot be defined, not unlike “what makes a good father”. That said, four characteristics have been similar in High Impact leaders :

A HIM is the type of men who would cast a light, if it were both possible and necessary, but would never curse the darkness if wasn’t (possible).